Parrots live a very long life. Some species can live as long as humans. Sadly many times a parrot Pet will outlive its owner. And because of this long life span they have that also means there are different stages of their lives. We can break their life stages into seven parts. It’s important to know which stage of life your parrot is in to properly care for him and to know what to expect. 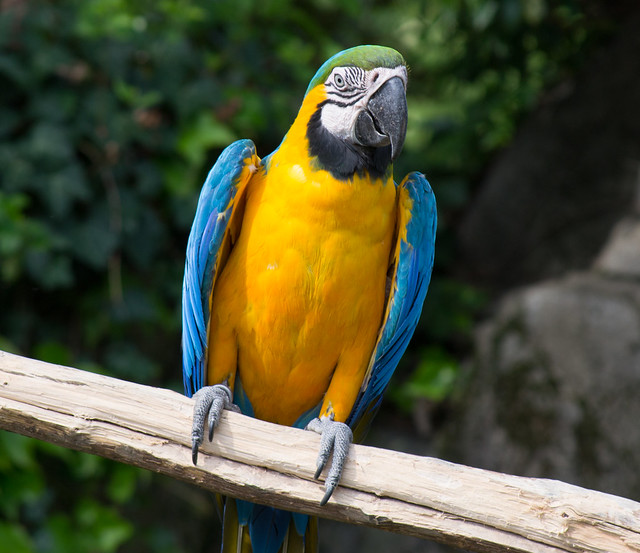 So you have a little hatchling. Baby parrots are born completely blind and naked. In the wild a baby parrot is fed regurgitated food by his parents. Human breeders will feed the baby parrot formula through a syringe injected into his mouth. The formulas contents will vary from species to species. But it should closely resemble the regurgitated food a parrot would get in the wild from his parents.

This is an important time in a parrots life to get parrots accustomed to humans and keep them tame. That doesn’t mean if you don’t get a parrot in this stage of life he can’t be tamed, but it will take training to accomplish that. Getting domesticated parrots from a breeder will hopefully gotten your parrot imprinted that humans are trustworthy.

This is the stage of a parrot’s life where he begins to learn to fly or has begun to fly, but still depends on his parents for food. If a parrots wings are going to be clipped it should be done during this stage, but preferably after the parrot has already learned to fly. If you do it before, then he’ll likely never take flight.

As I’m sure you can guess a weaning parrot is in the stage of life where he’s being weaned off of parent feedings. This is usually done once a parrot has completely learned how to fly. In captivity this is done by slowly introducing solid foods. This has to be done by a trained breeder so you don’t have to worry about your parrot being malnourished or starved.

This is the time in a parrots life when he is able to fend for himself. Or in captivity is completely on a diet of solid foods and off of formula. This is the time a parrot can be sold. This is a good time to get a parrot of this stage of life because usually they are very accepting of new people.

You can tell if you are getting a juvenile parrot in most cases by looking at his feathers. It will of course depend on species, but most species of juvenile parrots do not have the full adult color and they sometimes don’t get them until a few molting sessions.

Yes, parrots go through puberty too. This is when the parrot becomes sexually mature and it can vary by species of parrot and even the sex of the parrot. There can be significant personality changes during this stage which might be short lived and might only happen during mating season. It’s possible your parrot might fall in love with you and you’ll see some strange behavior which includes regurgitating food at you or trying to make love with your hand or push his back against you trying to get you to mate. It’s important that you not encourage this sort of behavior by stroking your birds vent when he does this stuff or handling him. Be patient with your parrot during this time and remember to keep him active and stimulated to help avoid some of the acting out you might experience when your parrot is trying to mate.

This is a parrot who has been through several mating seasons. He should calm down by this time and settle nicely into life as a parrot in captivity. But they are also less willing to try new things most likely at this stage of life. Kind of like many humans who get set in their ways in adulthood.

The stages of a parrot Pet aren’t all that much different from the stages of a human. They are born, cared for by parents, begin to recognize them, learn to walk, and eventually go out on their own. Going through puberty and then settling into an adult life and set in their ways. Parrot ownership is a lifelong commitment so be prepared for all of these different stages of life.

Simple Ways to Get Started Cross stitching is a fun way to pass the time and relax. There are several different ways...

What to Look for When Buying Your Next Pair of Shoes

Small Kitchen Remodeling: Questions to Ask Your Contractor Before You Hire