C olors of Ferrets regardless of the level of expertise one has with ferrets, each time anybody goes to buy one he/she cannot help but give thought to the numerous colors either consciously or subconsciously. In either case, one should know that there are a wide variety of ferret colors available today, hence deciding on which color to choose will be a tricky affair to say the least. 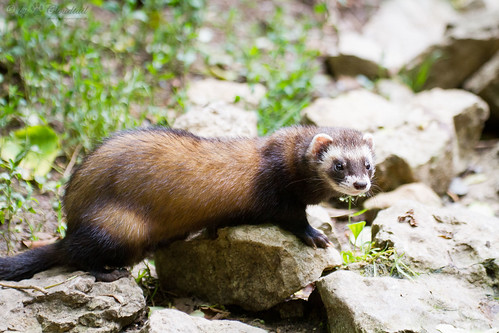 You might wonder how these many different colors came about since the only two natural ferret colors are sable and albino. Well the answer is simple; through selective breeding by humans. Nonetheless, it should be noted the most common ferret color today remains albino.

The albino gets its name from its all white hair that is a result of lacking pigmentation. Given that albino ferrets are easy to spot both in the dark and in inauspicious surroundings, they are preferred by both hunters as well as families. Note though that studies have shown that albinos can often have eyesight problems. This though should not be a deterrent for anybody wanting to buy an albino since the typical albino makes up for its weak eyesight by exhibiting heightened hearing and smelling capabilities.

While the albino represents one facet of the two natural ferret colors, the sable is the other, boasting rich dark brown hair with a white to golden undercoat. Surprisingly the sable is not as common as its derivative black sable, which has blue-black hair with a white to cream undercoat. The black sable usually has eyes that are dark brown to black in color and a nose which has patches of brown on it. The high popularity of the black sable lies in the richness of the black coat which contains no other colors.

Similarly, the third most popular colors of ferrets , is the chocolate sable, which also gets its popularity from its unique chocolate brown color which covers all the hair on the ferret’s body. The undercoat meanwhile is creamy in color, hence a warmer alternative to the black sable which is darker in nature.

Closely following on the heels of the chocolate sable’s popularity is the champagne color. While the guard hair has a tan or light chocolate color, the undercoat is a beautiful cream to white shade. In addition, the eyes are a luring light to dark burgundy while the nose is a soft pink.

Hence, the keen observer will note that all the common colors derive their popularity from the fact that one color dominates the guard hair while the undercoat is of a softer tone. The same holds true for the cinnamon ferret, which is another popular color.

Although somewhat less popular than the rest of the ferret colors mentioned above, the cinnamon is still found in many homes today. It boasts brown guard hair, although it should be noted that at times these guard hairs have reddish implications. The undercoat too varies greatly from a reddish brown complexion to a blonde. Meanwhile, the legs and tails of this ferret color are usually a tad darker than the overall coat color. The eyes are usually light in color but can be dark burgundy at times as well. The nose, on the contrary, can vary between pink, beige, and brown.

Colors of Ferrets regardless of the color you finally choose, remember that your pet’s color may change with the change in seasons, hence do not be alarmed if you notice any alterations in your ferret’s colors. Moreover, you should also know that baby ferrets too change color as they grow older. Hence if you have your eyes set on getting a particular color, make sure you buy your kit from a reputed breeder so that the chances of you being bumped another color are reduced.

Not only do fresh, organic grown vegetables taste better, but they are also better for your health. Organic vegetable...

Know More About Personalized Roofing Services – What Is It?

Planning Your Own Workout Program